Welcome to Opt Out Washington... Learn the Truth about the SBAC test!
The SBAC Test is one of the most unfair tests ever created
The SBAC Test is designed to fail as many kids as possible.
No Third Grader should EVER be labeled as a failure!
SBAC requires students to spend most of the year being drilled on test prep trivia.
Instead of learning to love school, kids learn to hate tests.
The SBAC test is copyrighted and developed in secret!
We give you a form and tips to help guide you through the opt out process.
Say no to expensive, time consuming, child harming high failure rate tests.
Share our opt out information with your friends, neighbors and other parents!

During the past 20 years, Washington tax payers have spent hundreds of millions of dollars on a series of disastrous and harmful high stakes tests. These included the WASL test and the MSP test. Look at how one Third Grade child described the WASL test: 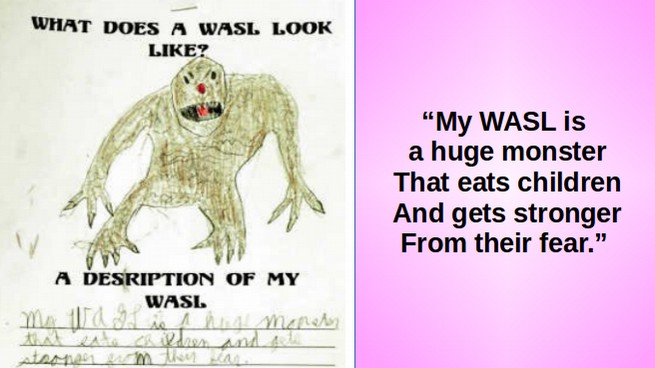 The same corporate interests (and even many of the same people... see here) who produced these prior test disasters are back again with the SBAC test – looking to make even more money by harming even more of our children. Shocking as it may seem, the SBAC test is much worse than any previous test. SBAC is the first test that has been specifically designed to unfairly label more than half of the students in Washington state as failures. Just look at the following chart which was posted on the SBAC and OSPI websites in the fall of 2014: 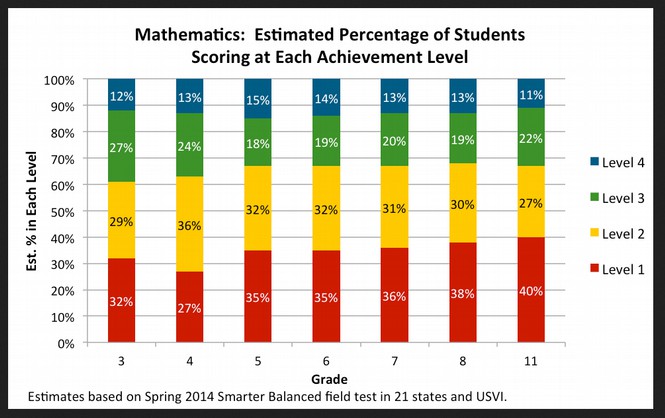 Only the blue and green bars are considered “passing.” Levels 1 and 2 are considered to be “failing.” So the SBAC test will declare 61% of Washington's 80,000 Third Graders to be failures this summer. That is more than 48,000 children whose lives will be permanently harmed by being labeled failures. For comparison, the prior WASL test only labeled 31% of Third Graders as failures in 2008 and the MSP only labeled 35% as failures in 2013.

What makes the SBAC failure rate even more despicable is that Washington State students are among the highest achieving students of any students in the nation and even in the world. In 2013, the national average math score for 4th graders was 241. Washington students scored 246 – one of the highest average scores the nation. 86% of Washington Fourth Graders scored at Basic (Grade Level) or Above on the 2013 National Assessment of Educational Progress (NAEP) math test. The NAEP test is the longest running and best researched test in the nation. So only 14% of our 4th Graders were below grade level in 2013. For more information on how well Washington state students have done on national tests, see here.

Check out this chart:

Notice that the failure rate on the 2015 SBAC test (61%) will be more than four times higher than the percent of students who are below grade level on the 2013 NAEP test (14%). Put another way, of Washington's 80,000 Third Graders, only 10,000 are below grade level. But 48,000 will be unfairly labeled as failures by the SBAC test. This means that 38,000 Third Graders who are actually at or above grade level will be told they are failures! This is a crime against our children. Our kids are not failures. It is the SBAC test that is a failure! The reason the SBAC test is a failure is because it is unfairly labeling students as failures who are at or above grade level.

Welcome to the SBAC Shell Game
An unfairly high failure rate is not the only glaring defect of the SBAC test. According to the SBAC website, there are more than 42,000 SBAC math questions. Very few of these questions have any research to confirm that they are fair questions that actually measure what they claim they are measuring. Therefore, very few of these 42,000 questions are valid questions. But to make matters worse, the SBAC test uses a controversial process called Adaptive Test Question selection. This means that students in any given grade or any given class will NOT be given the same test! Instead, the questions will vary depending on how the student answered the first few questions. Many students have already figured out that they will get easier questions on the rest of the test if they deliberately miss the first two or three questions. My daughter who is a 9th grader, told me that she and all of her friends know this as they have posted this information on Instragram.

But what makes this process of changing test questions based on student responses even more horrible is that there is no way to determine whether any given test or combination of questions is reliable or valid compared to the other SBAC tests. Each test for each child is a black hole. Each test is a shell game. Neither parents nor teachers will ever get to see the actual test that their students took. 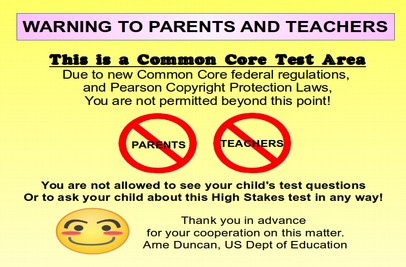 What High Stakes Computer Driven Tests Really Measure is Not Academic Ability but the Income Level of the Parents
Below is a chart comparing the test scores of a low poverty school district (Mercer Island) to a neighboring high poverty school district (Renton). Both school districts are in Washington State and are only a few miles from each other (Source: OSPI Washington State Report Card). Note that the difference of about 20% in test scores is about half of the difference in poverty rates scores between the school districts. Some low income kids do well. But most low income kids suffer and will continue to suffer until their parents get a job and the children get a stable home. 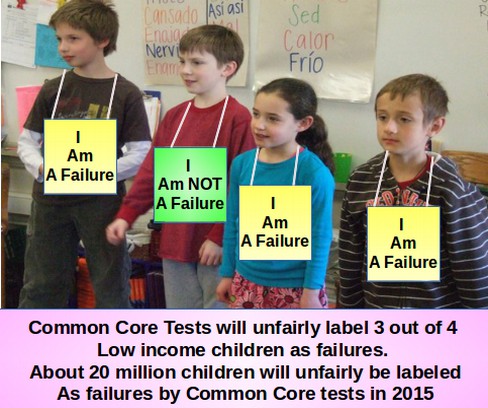 The real problem in our state and in our nation has been a rapid rise in poverty thanks to all of the money being robbed from the poor and middle class and horded by the super rich. Childhood poverty in the US and in Washington state has risen rapidly in the past 15 years. In 2000, only 30% of the students in Washington state were eligible for Free or Reduced Price Lunch. Today, almost 50% of all students in Washington State qualify for FRPL. Below is the rate for the past 16 years that OSPI has been posting this statistic as part of the OSPI Washington State Report Card. http://reportcard.ospi.k12.wa.us/summary.aspx?year=2012-13 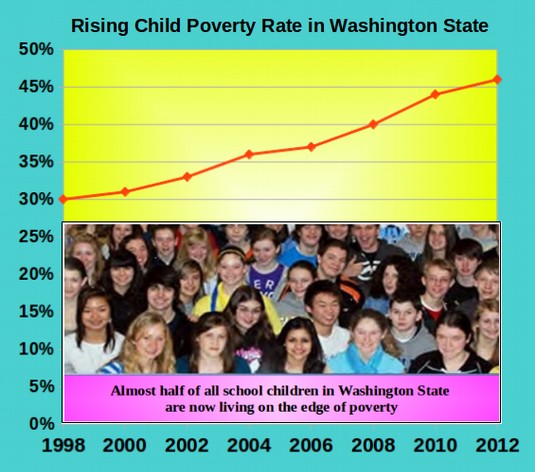 The child poverty rate in Washington State is currently at a shocking 46%. How can this be? The underlying cause to this rapid rise in childhood poverty problem is the increasing lack of jobs for parents. Washington State has a total population of about 7 million people. Of these about 1 million are school age children and about 4 million are adults in the workforce. Unfortunately, Washington only has about 3 million jobs. This means the real unemployment rate in Washington State is about 25% - not 6% as reported in the mainstream media. In addition, of the 3 million jobs, about one million jobs have been cut from full time to part time jobs – which are cheaper for wealthy corporations as part time jobs do not require paying for health care and other benefits. 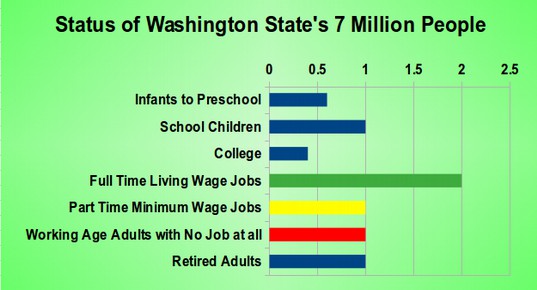 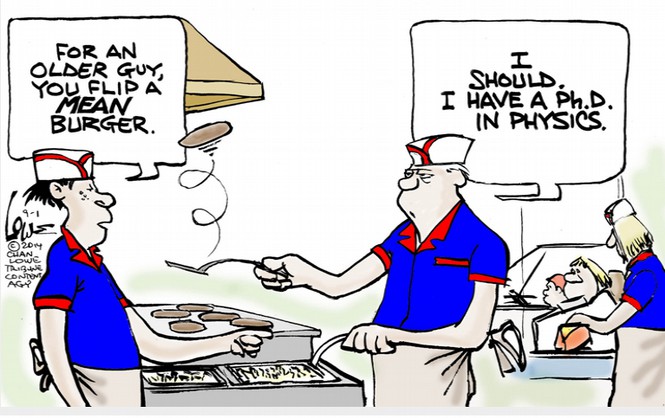 Thanks to billionaires corrupting our political system, deregulating the banks and crashing our economy, nearly half of the children in our State and in our naton are now living in or near poverty. Child poverty in turn is the leading cause of school failure. If we want kids to do better in school, it is time to make sure that their parents have a living wage full time job!

What about competing with all of those kids in China and Europe?
The real problem in the US is childhood poverty. Kids without food or a home and living in the back of a car or in someone's basement are not going to do well in school. On every international test, when we adjust for the extreme poverty in the US, our kids, our teachers and our schools are performing among the best in the entire world. The average poverty rate in other developed countries is only 10%. But in the US, it is over 20%. 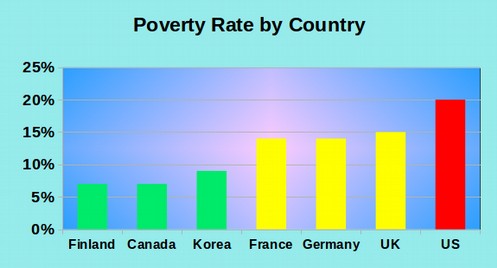 Students in US schools where the child poverty rate was less than 10% (similar to other developed countries) rank first in the world in reading and science and third in the world in math. 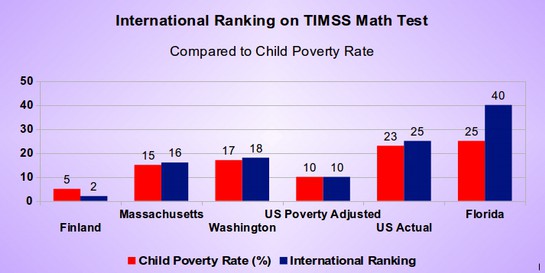 The other reason Finland does so much better on international tests than the US is that the child poverty rate in Finland is only 6% - one of the lowest childhood poverty rates in the world.

Why do rich kids do better on high stakes tests than poor kids?|
Here is what child development researchers say: “Children whose parents read to them at home, whose health is good and can attend school regularly, who do not live in fear of crime and violence, who enjoy stable housing and continuous school attendance, whose parents’ regular employment creates security, who are exposed to libraries, music and art lessons, and who are surrounded by adults who model high educational achievement will, on average, achieve at higher levels than children without these educationally relevant advantages.”
Carnoy, Martin & Rothstein, Richard (January 2013) What Do International Tests Really Show About U.S. Student Performance? Economic Policy Institute, Washington DC. http://s2.epi.org/files/2013/EPI-What-do-international-tests-really-show-about-US-student-performance.pdf 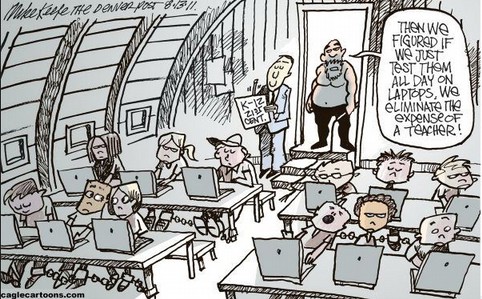 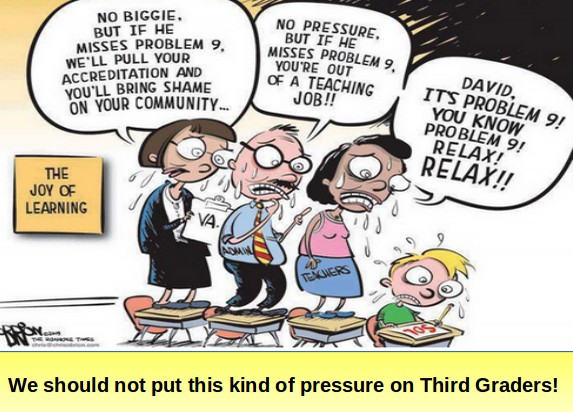 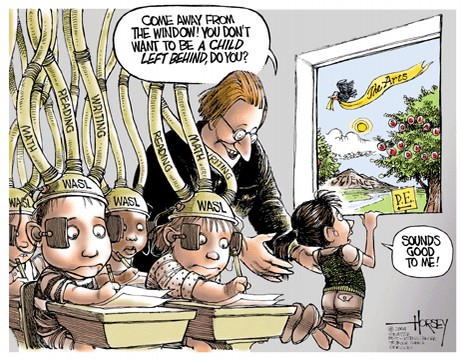 Click on the menu items above to learn more about how high stakes testing harms kids and how you can opt your kids out of the SBAC testing scam here in Washington state.